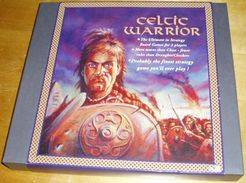 From the game itself: More moves than chess - fewer rules than draughts/checkers. A game that could almost have come from the Bronze Age itself - when the Celtic Nation was at its most powerful. This game of Celtic Warriors employs an ancient method of entrapment know as "Custodian Capture" , a ploy which dates back many thousands of years. The first impression of the games is something like a chess/checkers hybrid. More checkers than chess though. Two players face off, trying to reduce the opponent to just one game piece, thus winning the game.