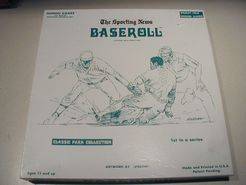 This is a very simple baseball game. It takes place on a nicely illustrated board of Wrigley Field in Chicago. It involves rolling dice and comparing the rolls against charts to find the outcomes. It was not licensed by any league, so there are only fictional players in the game. There are a few decisions made during the game. You can move your outfielders to different positions depending on the situation. You may choose to roll on a stolen base chart or a bunting chart or a hit and run chart. It appears that this was planned to be a series of games. The box says "1st in a series" and states that it is part of the Classic Park Collection. It doesn't appear that they ever made any more versions, and Wrigley Field looks to be the only one produced.