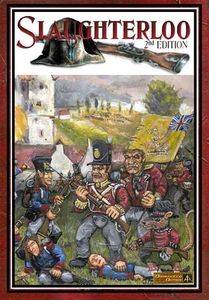 Slaughterloo is the game of massed armies involving the world of Valon, the fantasy world of Flintloque. The game includes two volumes, the Rulebook and the Army Lists, as well as character figures for the Orc/British leader and the Elf/French leader, as well as dice and command cards needed for play. You will need to put together your armies from the fantasy Napoleonic line produced by Alternative Armies for this and Flintloque/Deadloque. While I bought it to play the game, I found it was very handy for Flintloque players as it contains a much more complete background on the world of Valon, as well as details on the uniforms of the different armies and races of the fantasy world. Lots of photographs in color and black &amp; white give the player lots of details to help paint their units. There is also a sample game with color photographs showing each phase and turn of a game to demonstrate the rules in action over a period of three turns. The game recommends minimum units of divisions, made up of an average of 3 infantry units (around 20 figures each), one cavalry unit (of around 10 figures) and one artillery unit (one or two guns with crews, limbers, etc.), but suggests that each player can control a corps of 2 divisions. I believe that you could play to learn the rules with just 2 or 3 units as you build your armies. There is some player-to-player and distributer-to-player support available on an associated Yahoo group. Description is based on the 2nd edition.