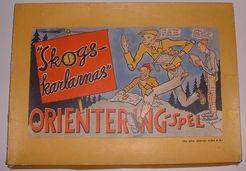 This is an old Swedish game seeking to simulate the beautiful and sometimes harsh sport of orienteering. It's not a very accurate simulation (or rather it's quite crappy orienteering). To win the game you must visit a number of checkpoints (in a specified order) and get to the goal before the other players. The game board is basically an ordinary orienteering map with an overlayed grid. To move, you roll three dice. One is an ordinary D6 that tells how far you can run this turn and the other two gives the directions that you can choose from. The direction dice both have three blank sides and the other three sides have directions N, S, NS and E, W, EW respectively. If you are running along a road or river or other distinct feature of the landscape you ignore the direction dice. If not, you have to combine and choose one direction from the direction dice (if both dice are blank you can run any way you like, not necessarily only in one direction). This game was published during the 1940s.