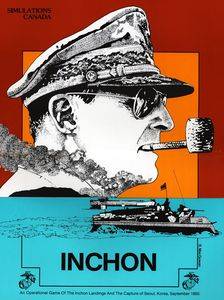 Inchon depicts the Korean War's most famous battle, the U.S. and South Korean amphibious landings that led to the liberation of Seoul and, coupled with the defeat of the last North Korean assault on the Pusan Perimeter, turned the tide of the war (until, that is, Communist China intervened in force). The map scale is 1.7 kilometers per hex. The game lasts 12 turns that evidently equate to days. Units are companies and armored platoons for the U.S./ROK, mostly battalions for North Korea (whose army the rulebook consistently calls by its Korean name, "In Min Gun" or "IMG"). Higher level headquarters units implement the game's (rather restrictive and cumbersome) command rules. The components are typical of Simulations Canada: a plain but functional two-color map, simple counters and a small, tightly printed rulebook. U.S. Marine and Army counters are shades of green, South Korean shades of red, North Korean a uniform brown. Counters are one-sided, with the back giving setup or arrival information for the historical scenarios. The U.S./ROK side earns victory points by seizing objectives in and around Seoul, the enemy by inflicting casualties. As alternatives to the historical setup and reinforcement schedules, the U.S./ROK may use a free setup, or the IMG may receive more rapid reinforcements. Game turns are divided into "impulses", a concept borrowed from White Death, a Frank Chadwick design. In each of its impulses, a side may use all or some of its 9 "movement points" (but always at least one). The impulses alternate until all movement points are exhausted or neither player wants to do anything further that turn. The system is attractive in principle but may bog down in practice. It also requires record keeping, as air, naval and artillery units may bombard only once per turn rather than once per impulse. Although all units have the same 9 movement points, how far they in fact can go differs by type - tracked vehicle, foot, support (wheeled vehicle) or "irregular" - and by morale class. If, for instance, a player divides his turn into three impulses, an "A" class armored platoon can potentially move 45 hexes along a road, while "C" class infantry company could advance 9 at most. Higher class units are also less likely to break in combat and can operate effectively at a greater distance from their HQ's. Out-of-supply units are slowed down. Those suppressed by bombardment may not move at all. According to the designer's notes, "In the historic scenario most play-tests ended with the UN player getting most of his objectives, though about half the time he was not able to secure the Seoul capital hex in time. As a result the game usually turned on how high a casualty level was sustained to get these objectives. . . . In the various Free UN landing and Rapid IMG reinforcement scenarios playtests indicated just about anything could happen."