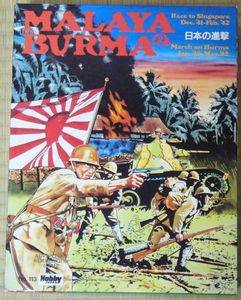 Not two as the title suggests, but three separate games in one box: Race to Singapore covers the Malaya Campaign in 1941-1942, Burma the Japanese invasion of that country at a similar scale, and Fall of Singapore is a tactical/low level operational game about the Japanese assault on the island of Singapore itself. There are "rough" linking rules to join the two campaign scenarios. Features 4 hard backed maps and 2 paper maps for air combat, 600 counters and 22 pages of dense English rules. Scale for the two campaign games is about 11 days a turn, 36-43 km a hex (depending on the scenario played) and units are primarily regiments and brigades. Fall of Singapore has 5km hexes and 2 day turns.