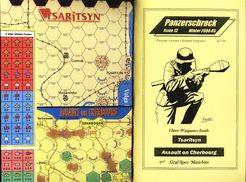 "Tsaritsyn is a two-player simulation of perhaps the most pivotal battle of the Russian Civil War. Here, White Russian forces in southern Russia under General Wrangel fought to break through Soviet Red Army forces attempting to conduct a Verdun-like defense of the city of Tsaritsyn in the early summer of 1919... A little over twenty years later the German Army had much the same problem when the city was known by a different name - Stalingrad." (From the Tsaritsyn rules introduction.) Units represent battalions; each hex equals 1.5 miles; two turns represent one day. Units represented include Armored Trains, Artillery, Cavalry, Tanks (and armored cars), Infantry, River Gunboats, Milita Units and Sailors (highly motivated infantry). The White Russian player wins by occupying all three hexes of Tsaritsyn while keeping a line of hexes free of enemy units or their zones of control from Tsaritsyn to the south edge of the map.