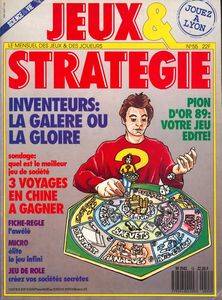 A magazine game from Jeux et Stratégie #55. It is 3046. Players build up two Mad-Max-type small naval fleets and fight it out. Each player starts with a fleet of seven ships: one flagship, one battleship, one frigate, two battlecruisers, and two escorts. The five ship types each have specific speeds, armor, weapons, maneuverability and staff morale. At the beginning of the game, players spend money to improve fleet equipment and staff. A pilot commands each ship and each pilot is given points to split between Tactics and Leadership attributes. These characteristics are used to modify dice rolls during combat. A more skillful Admiral commands the flagship. Each turn is played in one real-time minute. Ship speeds correspond to the physical number of centimeters a ship can move on the table during a turn. Combat is resolved after every ship movement. Depending on ship positions, players can shoot projectiles, ram or board other ships. The success of an attack and the degree of damage are determined by modified dice rolls. Ships sink if their armor score falls below 0 and players overtake ships if there is no more staff on board. The game ends when one Admiral is captured or dies.