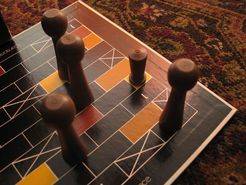 Carapace is something like a refined fox-and-hounds: The two players have different sets of pieces, and the offensive player can always capture the defensive pieces eventually. In a game, each player plays each role once, and the player who eliminated the defense in the fewest moves wins the game. The board is composed of rectangular spaces arranged like bricks in a wall, making it effectively hexagonal. There are blocked spaces where no one can move, and three sets of differently colored "closable" spaces - when an offensive piece is on a colored square, similarly colored squares are off limits to the defense. There are also squares numbered 1 - 3; when a defensive piece lands on one of these, the number is added to the offensive player's move total.