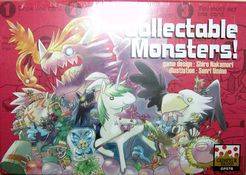 Despite the game's title, probably not a Collectible Card Game. Cards are labeled with numbers from 1 to 5. For each number N, there are N different monsters with that number on them. Players take turns playing cards to their personal tableau of monsters; at the end of the game, players score points for each monster they have played, but the value of a monster is diminished if you have played other monsters with the same number but different species.