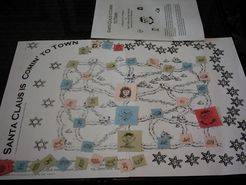 From the Introduction in the rules: "It's Christmas Eve. The little town of Elfenbein is covered with snow. To help Santa find his way in the snow, the people of the town have dug out 'streets' and crooked 'paths' between their houses. Now they are all waiting patiently in their homes for Santa's presents, roasting chestnuts on an open fire to kill the time. All people, except some naughty kids. They have discovered a new game: Santa watching! Santa enjoys the game too as he is the only one who has discovered the crooked paths. And when everything else fails to escape the kids he can always use some magic..." Han Heidema gave out specially designed games as Christmas cards; one for every year from 1990 to 1999. This was card #9 and was sent out in 1998. It features artwork by Doris Matthäus. One player is Santa and the other 2-3 players are the naughty kids. Each player is given the cards of one suit from a normal deck of cards. A round consists of each player simultaneously choosing a card to play. Whoever plays the highest card selects the order of play for the round. Each player's card will also determine how far that player can move. Santa scores points for dropping off presents at houses without being seen. The naughty kids each score points for seeing Santa and collecting the presents he's delivering. The game lasts 13 rounds (the number of cards each player has). Mik Svellov's website states "Han Heidema was given credit as a gesture by Alan Moon."