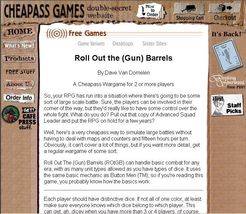 Roll out the Gun Barrels (ROtGB) is a free game from Cheapass Games. Downloadable from http://cheapass.com/free/games/rotgb.html From the website: Well, here's a very cheapass way to simulate large battles without having to deal with maps and counters and fifteen hours per turn. Obviously, it can't cover a lot of things, but if you want more detail, get a regular wargame of some sort. Basically handfuls of dice of different numbers of sides represent different size units on a battlefield. Different 'fronts' can be declared. ROtGB uses the Button Men mechanics renamed as 'Direct Assault', where the value on a single attacker die is equal to or greater than the value on a defender die and 'Flanking Maneuver', where multiple attacker dice add up to exactly one defender die (one of the flanking dice must be at least half the value of the defender die to keep a horde of d1's form overcoming it.) Both players roll at the same time (identifiable dice or seperate rolling areas help.) Players take turns attacking. After successfully attacking (wherein the defender die is removed from play and the attacker scores the number of sides,) the attacking dice are re-rolled. A fun way to use a big dice collection. Advanced rules liek Terrain and Reinforcements round out the game. Scenarios for medieval and space combat are there as well. Simple, fast and fun!