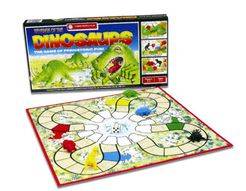 "The Game of Prehistoric Fun!" This is a simple roll and move game for children. It consists of a some nice dinosaur figurines and a board with a central ring of stones and four loops connecting to this. The aim for each player is to start from their home cave and make their way around the board back to their home by rolling a die and moving that number of spaces. In Revenge of the Dinosaurs each player chooses one of four different coloured dinosaurs. The roll a die at the start of each turn determines how many spaces a player must move as players work their way around the board, while trying to avoid the Tyrannosaurus Rex. Some of the spaces have dino footprints on them. If you land on one, you roll the die a second time and move the T-Rex that many squares, either to get him out of your way, in someone else's or, better still, to frighten an opponent's dino back! The object is to be the first player to return to their home cave.