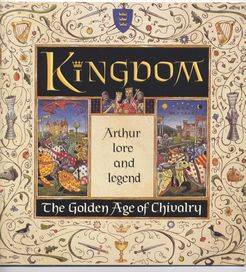 To quote the subtitle: "A Game of Chivalry Magic and Adventure". Set in Arthurian Britain, this game involves up to six players in a struggle to become king. The board consists of four interlocking parts depicting the southern parts of the UK. Unusually, the board is split into squares rather than the more traditional hexes. There are resource generating squares, mystical sites and castles. Players must manage these resources an fight battles to become the king of all England. The mystical sites contain guardians which must be fought in order to capture the holy grail. Riddles must also be answered correctly. Battles are dice and table driven affairs. The boards are heavy and in keeping with the theme. The counters are very thin and insubstantial. There are two dice, 150 knight counters, 150 foot soldier counters, 150 standard counters, 84 gold coin counters, 9 magic tokens, 16 guardian cards, 47 cards of fortune, 36 riddle cards and 6 wipe clean record sheets.