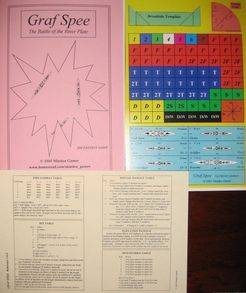 Graf Spee is a World War II tactical naval game, pitting the German pocket battleship Graf Spee versus three Royal Navy cruisers off the coast of South America, December, 1939. Designed by Gary Graber. The game was initially released as a "Mini-Sim" game in Panzerschrek #13. The required the components to be photocopied and mounted prior to playing. It was subsequently released as a "Zip Edition" with color counters and a player aid printed on cardstock. The counters still need to be cut out prior to playing. The Zip Edition also provided additional informational markers, ships, scenarios/variants and a modified optional odds table. It has subsequently (2011) been re-released in a fully revised edition under the title Battle of the River Plate.