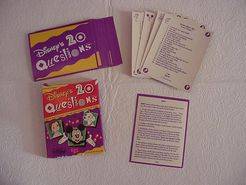 The game consists of 55 cards. Each represents a Person (widely defined to include the likes of Old Yeller and Daisy Duck, as well as groups, such as The Lost Boys), Place (Burbank or Main Street USA), or Thing (anything that doesn't fit in the other two categories, including concepts like Twitterpation). There are 20 clues on each card, as well as a picture of one of four Disney characters: Mickey Mouse, Donald Duck, Pluto, or Goofy. The players take turns being the Reader, who will read one of the clues to a player. If that player guesses the Person, Place or Thing on the card, they get it. If not, the Reader reads the next clue to the next player, and so on. The object of the game is to be the first to collect three cards with the same Disney character picture, or to collect three cards with all different pictures. If you guess an answer with three or less clues given, you may randomly take a card from another player, add it to your hand, and then return a card of your choice to that player (which could be the card you just took). This allows you to possibly better your hand. Most of the cards are pretty easy for adults, but there are a few that are rather challenging. With a little handicapping for the kids, this game could be played by the entire family.