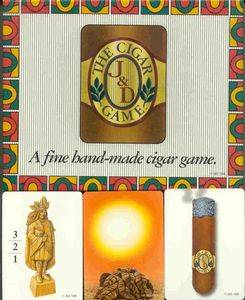 This is a set collection card game. You are attempting to play as many completed cigars as possible. Cigar cards come in 3 qualities which may not be combined in the same cigar. the quality of a completed cigar is also its point value (1 to 3). There are also 3 types of leaves needed to complete a cigar and they must be played in order. First the filler then the binder then last the wrapper to complete the cigar. You may have as many incomplete cigars down at a time and you may play on as many cigars as you want but you may not play more then 1 card to each cigar. This means that each cigar requires 3 turns to complete. There are the usual special cards that help you in various ways. At the beginning of each round the start player is bid on in increments of half a victory point. A round ends when 3 special drought cards have been played to the table or one player has 7 or more points of cigars played. The first place finisher receives his total cigar points not to exceed 7 and the second place receives his total cigar points not to exceed 6. No other players score. A game is played to 21.