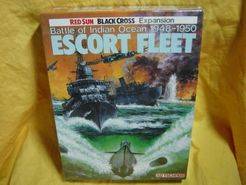 SGB-21 Escort Fleet (1986) (JPY 4800) Subtitled “Battle of Indian Ocean 1948-1950.” There is one map, stretching from Manilla in the Philippines to Bombay, India. The 504 counters represent only two basic things: ships and fuel points. There are six PACs (four of which are two sets of identical ones) and a 48 pg rulebook. The last of the Red Sun/Black Cross trilogy, this game adds the Japanese Achilles heel--oil. One quarter of the entire games’ counters represent either transports or submarines. There are no ground or aircraft present whatsoever. If this game were combined with its brothers, then there are plenty of options for introducing these units to the map. Game designer: Makoto Fukuda Historical designer: Daisuke Satou