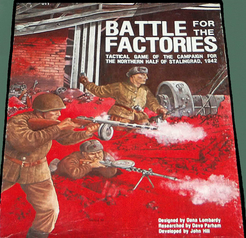 Battle for the Factories - Tactical Game of the Campaign for the Northern Half of Stalingrad, 1942 “German panzer and infantry divisions, weakened by weeks of street fighting, now redeploy to assault the northern half of Stalin’s city. Can you do better than the Germans and capture this strategic industrial center on the Volga River? Or as the commander of the Russian 62nd Army, can you correctly direct your elite Guards divisions into the battle to stop the Germans? Battle for the Factories’s companion game in this tactical series -- Fire on the Volga -- enables you to also play the first phase of this epic battle on the Eastern Front.” Components One standard bookcase-style box with a red cover and white bottom. The box is approximately 8.25” wide by 11.25” high One 37.5”x26” four-color unmounted map. This map is the north end of the city of Stalingrad and butts together with the Southern end of the city map found in the sister game Fire on the Volga. One 32-page rule book in black and white, 8.5”x11” in size. Seven counter sheets of 240 counters each, for a total of 1,680 0.5” counters.