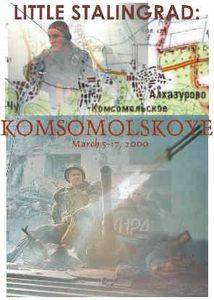 Komsomolskoye was the horrific scene of a grueling two week battle. In a historical sense, it was a "Little Stalingrad" as the Russians attempted to retake the small town of 5000 people at the foothills of the Black Mountains. Over 2000 Russians and 800 Chechens would lose their lives there. The urban setting littered with many brick and stone buildings with deep basements made for a bloody fight. On March 5th, the Chechen forces seized the town from the Russians and held on until the 15th. Every building would be a war. The Russians pounded the town with artillery, air and Mi-24 gunships creating simply more and more rubble. More Chechens arrived and by the 9th, some 1500 were in the town. Each basement had become a bunker. Russian elite troops were sent in, including Russia's recent new air-fuel weapon, the dreaded Buratino and Schmel. T-72's were sent in firing at point blank range towards the buildings. It was a messy battle and both sides were determined to win and the Russians had just been obliterated near Ulus-Kert on Hill 776 losing its whole 6th Paratroop company! Depicts what many call the most devastating battle after Grozny. Situated at the base of the Black Mountains, this small town of 5000 became for focal point of two desperate military machines. In early March, a weak Russian security force assumed control of the town. The Chechen forces were very close by and desperate. The Russian war machine had been ripping them apart. Taking advantage of the situation, the 500 man force attacked the town and wiped out the Russians. Beginning on the 6th, the Russian military made six attempts to seize the town, all failed. Artillery, airstrikes, T-72 tanks and Buratino's were called in. It was a sledgehammer. The Chechen force withstood this using underground pillboxes in the stone buildings, and by the 12th, the town was in ruin and the Russians still remained along the perimeter. The Chechen force somehow had received reinforcements and now swelled to 1500 hardened armed fighters. They had laid mines. From the 12th to 17th, Russian forces fought and ugly brutal urban battle with a cunning foe. The game comes with a 11x17" map, 280 counters, rules. The map scale is about 200 yards per hex. Each combat unit is one platoon. A game turn is one day of time.