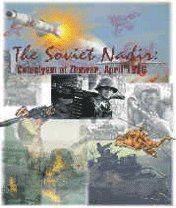 UPI) The Soviet Union suffered its greatest defeat at the Zhawar Complex near the Pakistan border on April 3rd. The Soviet 38th Commando unit, supported by Mi-24 gunships landed into what was thought safe ground, Instead, the Mujahideen armed with numerous SAMs, a few tanks, and many ZPU AA guns wreaked havoc on the 38th. SU-25s using laser guided bombs attacked the caves of Zhawar. One missile actually was guided into the cave. The 38th fought for its life as the enemy closed in on the multiple LZs, some 500-800 of them. The 38th, with 500 men, scattered, fought the whole day. By evening, most had been killed or captured and some 10-15 of the 32 helicopters used, destroyed. THE SOVIET NADIR comes with over 280 counters, 11x17 color map, rules. Game scale is tactical, 15 men per counter, 2 hr turns. Units include RPG, Plamya, T-54, ZPU, and more. Also included are Su-25s, Mi-24, Mi-8, Mi-4 helicopters. Can YOU succeed where the Soviets had failed?