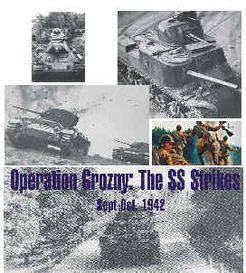 On Sept. 26, 1942, the last German effort north of the Terek river in the Caucasus began. This time it was the 5th SS Wiking conducting the attack through the narrow Altar valley near Malobek. The object was to reach Grozny and its oil or to move south to force the entrenched Russians to retreat. Facing the SS were a collection of Soviet forces well dug in and supplied with artillery on the 1000-2000 ft hills surrounding the valley. Their armor amounted to mostly British Valentine and American M3 tanks. The SS plan called for the infantry to clear the towering hills overlooking the valley while the 50 Panzers and SPWs raced through the narrow valley filled with defensive positions and AT trenches. The SS Commander, Steiner, had strong reservations about this attack and for good reason. The game comes with over 270 counters, rulebook, playing aid, one 11 x 17 map. Game scale is company/battalion, 800 yds a hex, daily turns.