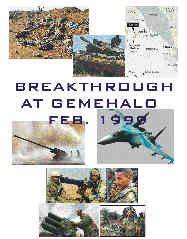 On February 23rd, the Ethiopian military conducted a massive assault upon the Eritrean Gemehalo fortress. Over 10,000 would attack, many would die. The WW1 style battle was fought with many very modern weapons. The vaunted defenses of Eritrea in the Badme area had been immune to enemy attacks for years. The fall of Gemehalo would spell doom to the Eritrean defense system. The question was, would it collapse? The game comes with a 11x17"map, 280 counters and rules in which morale levels will create success or failure. Game scale is nine hourly turns, company level. This was the key battle in the war and would define the war's outcome in the weeks that would follow. One side would break and run but which one?