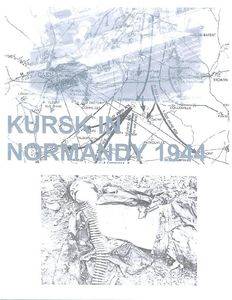 Kursk in Normandy depicts at the tactical level the epic British armor assault on July 18th. Three armored divisions totaling some 850 tanks would assault the SS positions on the Caen plains and advance into the hills of Bourquebus. Monty was desperate for a breakout and with so much excess armor available chose to "have it out with Jerry". Over 2000 allied bombers would pulverize the areas. Confidence was high. Monty was going to ram it down the Germans throat and hopefully reach Falaise. British intelligence was fairly inaccurate as to what actually laid in front of the armor and despite pleas, the 78 88mm guns , 1st SS Pz Division that were deployed on the ridge would not be touched by allied bombers. Of course, the SS had numerous PzVI, PzVIB, PzV tanks lying in wait. By the 20th, Goodwood had cost the British over 350 tanks destroyed in exchanged for seven miles. The Caen plains were littered with British Shermans, Firefly and Cromwells. Rommel himself had been responsible for the defenses. The British 11th Armor had almost ceased to exist. The Guards Armor division had been ripped. Game scale is 3 hour turns, 500 yds. a hex, 11 turns. Over 500 counters and two 11x17" maps which form a 17x22" playing surface. Most of the units are armor. Unique rules cover morale, Typhoons, Improved positions, Tiger battalions, armor strength and penetration values ( you will see why the Tiger was one bad cat!), tunnels, night, tactical combat, Leaders and opportunity fire. The AFVs in the game are: Brumbar, Pz IV, Pz V,Pz VI,Pz VIB, JagPz, Cromwell, Sherman, Firefly, StG.