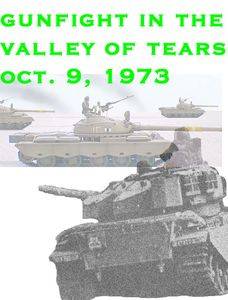 Covers the three hour battle that proved to be decisive. It was Syria's Kursk-like battle. Over 100 T-62 and T-55 tanks faced a paltry 20 IDF Centurion tanks, many short of ammunition. It was David vs. Goliath in modern day terms. The only thing the IDF had going for it was the 12 foot deep anti-tank ditch and the three tiered ramp positions for the tanks. The Valley of Tears remains perfect tank country, flat with long range of fire. To add to the confusion, the IDF patch quilt of forces all operated on different radio frequencies making any coordination impossible. For the Syrian, the AT ditch, which stretched out along the front was also littered with mines. Crossing it under fire would prove to be daunting using the mobile bridge laying equipment. Of course, they has Sagger AT missiles, greatly outnumbered the IDF and air support. Game scale is 200 yds a hex, individual tanks, 20 minute turns, squads of infantry. Over 300+ counters and color 11x17" map. Rules cover Saggers, Artillery, Aircraft, Ammo limits, Forward Observers, extensive use of commands, mines, bridgelayers and more.