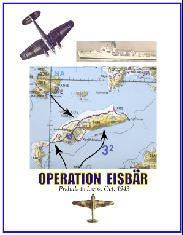 As the tide of WW2 began to sway in favor Allies in the Fall of 1943 with the Italian sudden surrender, the British began to pursue their peripheral strategy, linked with expansionist aims in the Balkans. However, oddly enough, they would not sanction adequate ground, sea and air forces to mount it. The British however, possibly because the capture of the Dodecanese had been one of Churchill's favorite projects ever since war began, plunged in hell or high water, ignoring the fact that boldness does not always equate to success. Kos, even today, remains a quaint island unchanged in many ways since 1943. Located in the Aegean Sea, four miles from the Turkish coast is 28 miles long and 6 miles wide, at the widest point. It has an area of about 115 square miles, and a population of 20,000 in 1943, an airfield at Marmari, near the coast, another at Antimachia, and an emergency landing ground under construction at Lambia, near the town of Kos. The highest elevation is 2800 feet. Because of the airfields and its small port, Kos was one key, which would unlock the Aegean. If it could be taken, argued the British, Rhodes would fall and with Rhodes in British control, the other islands garrisoned with Italians, would certainly surrender. The other Allies, the Americans, were not interested in the least and refused to even lend a few P-38 squadrons until too late. Thus, the British were on their own to pursue what Churchill had wanted: the soft underbelly of Europe. OPERATION EISBAR was the German operation, a prelude to Leros, to prevent the British the most important first step: Kos. The game is a unique blend that allows for either player to win. The first step for the Germans is to destroy the three Spitfire squadrons based on Kos. Only when this is accomplished can German forces invade the island or drop their paratroopers. For the British, if they can cause sufficient aircraft losses during the first phase (German air raids), they may persuade them not to invade Kos. Failing this, the British Kos garrison with one battalion must prevent the Germans from either landing or if they land, defeat them on shore. British BB, CV or DD's may suddenly appear causing havoc, yet, become targets for the Luftwaffe. British Beaufighters may also suddenly appear during an air raid or invasion and torpedo the German ships. The Random Events will make each game's outcome totally different. Above all else, the British must fly in their supplies using only eight DC3s during the first phase. The game's scale is platoons and company sized units, individual ships, each air counter is four aircraft. Each hex is 800 yards, game turns are 3-4 hours. The game lasts from Sept 17 to Oct 4. While the number of turns appears a lot, in reality, during Phase 1 (from Sept 17-Oct 2) turns move rapidly as only air battles and bombing occurs. Each player plans which map zone to defend and attack and what time! The game map is divided into area zones and used to determine which areas of the island will be targeted by the German, defended by the British. They also serve for placement of British Naval and off map based aircraft which may randomly appear! There 280 counters.