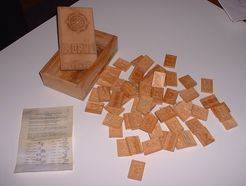 Horol is a traditional Mongolian game. It is usually played with carved wooden or bone tiles. Typically, a Horol set consists of 60 tiles, on which are shown sets (2 or 4) of the 13 animals of the Mongolian/Chinese zodiac, and also tiles showing the sacred Mongolian symbols Has (the swastika), Norov, and Horol (the highest ranking tile in the game). The most common game played with Horol sets is a simple trick-taking game, where a player leads by playing matching tiles of one type, and following players must play an equal number of tiles, preferably of a higher-ranking type to 'eat' the previous play. Whoever wins the hand will score depending on the number of tiles (1,2,3 or 4) led by the previous player. The winner of the hand then leads, and play continues until all tiles are played. Horol sets sold in Mongolia usually contain an an incomplete set of rules in English, including the following somewhat enigmatic description: "The Mongols have been playing this game since the 16th century. The game is considered to be a symbol of solidarity and increasing cattle."