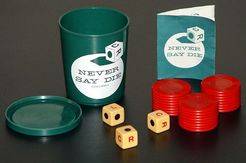 The object of this game is to win as many chips as possible. Three special six-sided dice are used; each dice has three red letters (an "L," a "C," and an "R") along with three black dots. Players start with three chips. Each rolls the dice (never any more dice than chips) and distributes chips according to the roll, either to the player on the left, the center (pot), the player on the right, or no action if a black dot is rolled. Play continues clockwise. Players without chips can stay in the game because the rolls of others may give them some chips (hence the name of the game), but must pass on their roll. Never Say Die, published in 1959, was republished almost exactly in 1992 as LCR. There are two rules in Never Say Die that are missing in LCR. First, players may permanently "retire" any number of chips over three that they own as individual winnings. Second, the winner of the pot in Never Say Die is the player who holds the last chip not in the pot and who rolls a "C." It's possible that a player will hold the last two or even the last three chips not in the pot; in this case she may be fortunate enough to roll nothing but "C's" and work all her chips to the center to win. If the player holding the last chip rolls a dot, she keeps rolling until she gets a letter. The winner starts the next game. This boxed game included a plastic dice cup (with snap-on lid), three dice, 24 large chips, and instructions. Re-implemented by: LCR