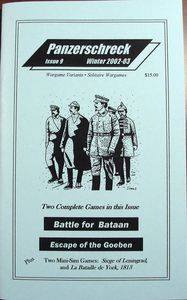 Siege of Leningrad was published as a mini-sim in Issue 9 of Panzerschreck Magazine in 2002/2003. It is an abstract solitaire game where the player controls the Russian defenders of Leningrad and attempts to survive 300 game turns (30 months). The game is consists of 8 pages of rules, a 4.25 x 5.5 "map sheet", an even smaller "scoring track" which records the status of Leningrad and 29 counters. As with all Panzerschreck mini-sims, the maps and counters need to be copied, mounted on card stock and cut out before use.