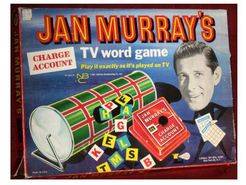 The object of the game is to form the greatest number of 3 or 4 letter words from letters read off by the Master of Ceremonies. Two players are the contestants and one player acts as MC. Letters are placed on a 16 square grid. Contestants can place the letters which are called out by the MC in any square of the grid that they would like. Once placed though, they cannot be moved. The object is to place these letters in such a way as to form the greatest number of 3 and 4 letter words as possible. Only words that are horizontal or vertical score. At the same time as this is going on there are also prizes to be won depending on how many words you finish. You score dollar points for creating words and then you spend these dollars to collect prizes which are paid for out of your winnings using a charge account price which is then converted at the end of the game to a retail price. The player with the highest amount of retail price prizes wins the game. CONTENTS: 70 Cardboard letter Tiles Pad of Contestant Word Sheet 1 Letter Selector Drum 2 Charge Account Recorders 15 Prize Cards (Ranging from a $150 record player to a $1800 cabin cruiser)