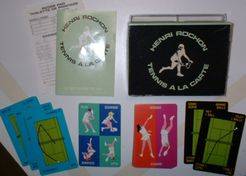 This is a card game version of tennis, based entirely on luck. The server draws from a service deck, if the ball is in play, the receiver draws a card from a play deck, and continues in that manner. Everything is highly abstracted, in that the type of shot doesn't matter beyond being in play or out. The one exception to this is that if the receiver of the service draws a return card of 'volley' or 'overhead' s/he has failed to return service. The game comes in a small box with rules, 20 service cards, 32 play cards, and score keeping sheets. If you're wondering, Henri Rochon was a Canadian tennis player whose great claim to fame was apparently to have played at Wimbledon in 1952 before an audience of 25,000.