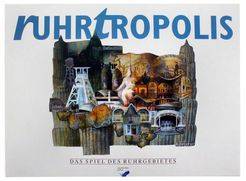 Apparently a promotional game for the Ruhr Valley district in Germany. It seems that the area has historically been associated with heavy industrialization, and the game was part of a public relations effort to alter this image. The board is divided into a hexagonal grid, onto which tiles representing land developments (businesses, industries, parks, an airport, etc.) are placed. Each space has a set of three tiles which can be placed on it, representing the uses to which the land was put "yesterday", "today", and "tomorrow". Players plan the order in which developments occur geographically, using colored cylinders to mark ownership. Each stage of development requires two player markers, promoting negotiation between players as to what happens first. Developments on a given space must be carried out chronologically (ie. in the order "yesterday", "today", and "tomorrow"). When a development is completed, the rules allow the acting player to swap markers with those of other players in adjacent spaces, subject to certain limitations, thus expanding his control over the local area. At the end of the game, victory points are awarded for each development a player controls, with the more advanced developments scoring more points.