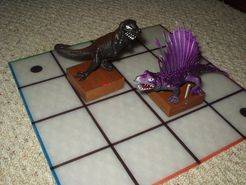 This game is about a battle between two or more giant creatures. The components consist of several rubber monsters (dinosaurs, giant gorillas, etc.) that are about 4 inches tall and mounted on wood blocks. You play on a 4 x 4 square board. Each turn you choose cards from your deck to play that indicates which direction you will move, and another that indicates which direction you will end up facing. Diagonal movement or facing is not allowed. Both players play simultaneously, so it is basically a guessing game of trying to anticipate where your opponent will move. If your creature ends up adjacent to your opponent's creature AND is facing it, then you inflict a "hurt" on your opponent. It takes 3 "hurts" to win. Some of the creatures have different abilities, including armor (blocks an attack), more agility (can turn 180 degrees instead of just 90), or multiple attacks (like the Stegosaurus who can attack with his head or his tail).