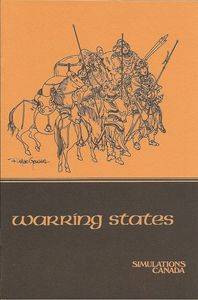 “The period of the Contending States in ancient China lasted over two centuries. Its last decade began with 7 powerful states in constant conflict and ended with just one state remaining. Victorious, all conquering, Ch’in brought all of China under one hand for the first time in its history, thus beginning a national entity that survives today. The game is on a grand strategic scale and may be played by 2 to 7 players with turns representing one year, hexes 47 km across and rules specifically designed to display Eastern philosophies and methods of warfare.”