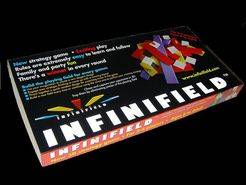 In every round one player builds a playing field from 24 blocks of different length. Each player gets a pawn and chooses a starting position. Then players take turns moving their pawns from block to any adjoining block, trying to capture opponents by going onto the same block with them, until only one player remains on the field. Every five turns one player chooses a block to remove from the playing field, so the field is reconfigured throughout the game (because fewer and fewer blocks remain). This ensures that the game never ends in a draw and provides additional strategy opportunities. The game set includes an extra pawn and a move counter to help keep track of who makes every fifth move. There are no random events in the game, the outcome is entirely based on players' skill. The rules specify some restrictions for building the playing field to prevent the person who constructs it from gaining an unfair advantage.