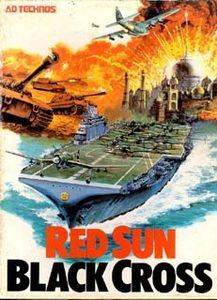 SGB-11 Red Sun/Black Cross (1985) (JPY 6800) RS/BC has two mapsheets, 1008 counters, six PACs, one 30-pg history booklet, a 32-pg scenarios booklet and a 48-pg rulebook. Also included in many copies of RSBC are 49-pg copies of English rules, including all PACs, plus charts and tables (the rules themselves are only 23 pages long). The setting for the game is that Germany won WW2 (conquered Europe) due to Japan not attacking the USA and we both stayed neutral while Japan picked up territorial concessions. Now it is 1948 and Germany and Japan are about to fight it out for control of the Indian subcontinent. The USA is on Japan’s side in the conflict. The maps go from Turkey and Egypt to Burma. Ground units are divisions, capital ships are shown individually, and air units are about 30 planes each. The rules state that all three types of combat (air, land, naval) are represented equally and there is a form of programmed instruction here in that there is a separate naval and ground game, with the relevant air rules being included in each. One of the more innovative rules that I remember reading was that combat was preformed in-hex. Supply points play a key role in the game, as they determine who is allowed to do what on any given turn. Game designer: Shunichi Takanashi System designer: Daisuke Satou &amp; Makoto Fukuda