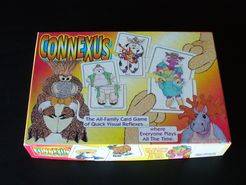 Connexus is "The All-Family Card Game of Quick Visual Reflexes... Where Everyone Plays all the Time." The game consists of an 8 second sand timer and 200 oversize cards each depicting either the top half or the bottom half of a colorful and humorous cartoon animal (such as Titus the skateboard riding elephant, Dolly the hula dancing penguin, or Howie the hockey playing monkey). Play progresses as each player in turn draws a card from the shuffled deck and places it in plain view on the table. The player who's turn it is then has 8 seconds to find a matching pair of cards anywhere on the table and yell "Connexus" before play moves on to the next player. But there's a catch! Not every matching pair of cards will correctly fit together, as each card has either a tab or a slot on the edge where the two cards join. For a match to count, one card must have a tab and the other a slot. Legal matches are immediately removed from the board, however, mistakenly yelling "Connexus" without being able to make a match causes the player to forfeit one previously completed match. Gameplay continues until one player has reached a predetermined number of matches. The fast pace and the challenge of seeing and remembering all the cards and being able to locate them quickly enough to ensure that a potential matching pair will fit together are what make this game so exiting for all players involved. Players must constantly be aware of their own cards as well as the other players' cards at all times in order to make matches. I believe only a few proof of concept prototypes of this game were ever published which is a real shame because this game is one that can truly be enjoyed and played competitively by players of any age.