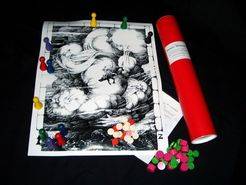 Money Monsoon is a simple auction game with some twists. The board is simply a track, and each player has two pawns. The game ends when any one pawn reaches the end space, and the player with the most money then wins. The turn player rolls an 8-sided die, and the result of the die roll is then auctioned using a silent bid (written on pieces of paper). The high bid wins but pays the second highest amount (like Knizia's Last Paradise), and that player can move one of their pawns the die roll amount. Money is paid to the die roller, unless they win in which case they pay the bank. Rolls of seven and eight have special properties. Moves can be made forward and backward, and this is relevant since when landing on another player's pawn, that owner of the pawn hit pays 50 points to the mover. There are bonuses for finishing in first, second, and third place also.