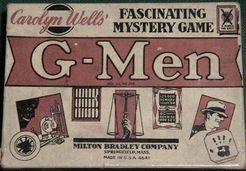 This card game is similar to other trick-taking games such as Spades or Bridge, but simulates the old battles between Eliot Ness and the G-Men vs. the "Public Enemies". The game consists of four 12-Card suits and one 4-card independent suit. The cards are ordered from greatest to least, and are used to take tricks. The four independent cards are "Master Mind", "District Attorney", "X Marks the Spot" (opening trick card), and "Public Enemy" (no value during play, but scores points when captured) Points are scored for taking tricks, and, more importantly, taking tricks with certain cards in them. Bonus points are awarded for capturing the "Public Enemy". Capturing the Public Enemy scores and "Indictment", with three such Indictments scoring a "Conviction", with the reward of enough bonus points to "usually" win the game.