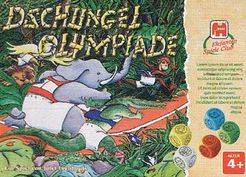 Each player chooses a coloured die as a pawn, the white die is used to roll during their turn. Each of the coloured dice features four different animals. Next, players put their dice on the game board. Throw the white dic and see which animal you have rolled. You start with this animal. Turn your coloured die so the animal you rolled is now facing upwards. Place your die on the first square where your animal is allowed to move. Players take turns rolling the white die. Keep turning your own die with the animal you rolled facing upwards. Move your die to a neighbouring area. Something special happens when you roll a lion or a mouse with the white die. If you land on a place with a fruit, you may take it. Set the fruit in front of you. You keep playing until every player has crossed the finish line. The first player who passes the finish line wins two pieces of fruit, and the second gets one piece. The other players do not receive any extra fruit. The player with the most fruit at the end of the game is the winner.