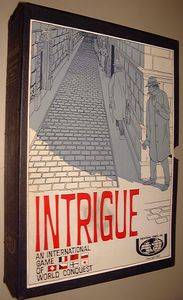 Intrigue - The International Game of World Conquest is a bookshelf-boxed game published by Universal Games, Inc. and copyrighted 1965 From the box: "Intrigue is an exciting game based on existing international situations, and involving world powers in a struggle for world conquest by means of diplomacy, espionage, and armed conflict. Intrigue is a stimulating and educational game for ages teen and up." Major parts of the game include the board which folds out to a rectangle, money, country cards, world issue cards, the rules, pawns, and tiny plastic soldiers.