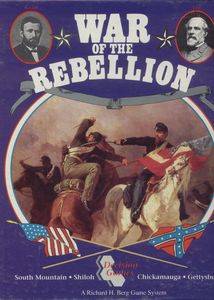 The game is based on Richard Berg´s South Mountain-system and includes the battles of South Mountain, Chickamauga, Shiloh and Gettysburg. Units are mostly demi-brigades, each hex represents 190-270 yards and a game turn represents 45-60 minutes of real time. There are four full-color 22x34" maps and lots of counters. A new addition is the command system. This forces players to activate one corps at a time, and move all units of that corps before you move any other. The movement rate is decided by a die-roll. All units within range of their commander may use a single die-roll, while out-of-command units must roll separately.