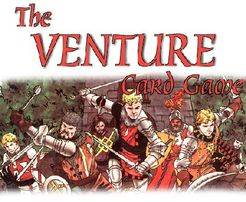 Extrapolated from the download site. www.njkingdom.com/venture/cardrules.html Venture, a fast-paced card game for 2 - 4 Players that must be downloaded from the site. Object of the Game There are many different Events that can occur in the Kingdom of Somerset. Your goal is to build Factions of Characters (drawn from a deck of Character Cards) at the game's three main Locations in order to complete those Events (symbolized by a deck of Event Cards). A Player who completes an Event Card places it in his Victory Display. When all the Event Cards have been played, the Players total their respective Victory Points. The Player with the most Victory Points wins the game! Playing the Game After setting up and choosing colors (usually, the color that is closest to each respective Player), randomly determine who will go first. Each Player takes her Turn by following, in strict order, the following four Phases of the Turn. 1) Draw Event Card: The first thing a Player does each Turn is draw the top card of the Event Deck. 2) Use Optional Card Text ("may"): Each Character possesses Card Text that allows him to function during the game in a special way. 3) Complete Location Events: A Player now checks to see if he has met the Requirements for any Location Events currently in play. 4) Two Card Actions: The Player now performs two of the following Card Actions. Draw a Card: Play a Card: Move 1 or 2 Cards: If a Player possesses a Character with a Title (such as King of Somerset), that Player can take a third Card Action during her turn. After a Player completes all four Phases of his Turn, play passes to the Player on his left. The game continues until the Event Deck is empty and all Location Events &amp; Bidding Events have been resolved. At this time, each Player totals the number of Victory Points in his Victory Display (as well as on any Artifacts he still possesses). The Player with the most Victory Points wins the game!