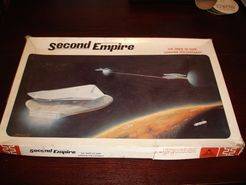 Second Empire is a 4x game published more than a decade before the term "4x" was even coined by Alan Emrich in his September 1993 preview of Master of Orion. Loosely based on any of a number of science fiction stories (such as the Foundation trilogy by Asimov) where a Galactic Empire reached its zenith and subsequently collapsed plunging civilization into the dark ages without FTL travel. And then eventually several of the remnant groups head back to the stars, begin reclaiming old colonies, and attempt to form the Second Empire. 2-4 players attempt to reform the empire through aggressive exploration and expansion -- confronting each other when encountered. According to Sid Sackson's "A Gamut of Games": Using a stock of raw materials, each player constructs his own space navy. The ships are sent into space, to do battle and to search for raw materials and the lost technologies of the first empire. This game has been supplanted by more sophisticated 4x games such as Throneworld, Twilight Imperium, Space Empires, and Eclipse, but if you are a student of the genre or just looking for a nostalgic old-school experience, you owe it to yourself to give this title a whirl.