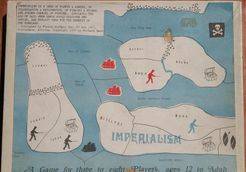 According to Sid Sacksons - A Gamut of Games: Travel accross the sea to establish colonies. Die throws indicate the wealth potential, which can be used for armies and fleets; or for ports, cities, and fortifications, which are marked by grease pencil on the plastic surface. Flying Buffalo published three versions of the game. The first had linoleum counters and hand-cut cards, details otherwise unknown. The second had cardboard counters and machine-cut cards (both somewhat crude), and came in a white box with a pasted-on cover sheet. The third had more professional components and came in a red printed box. The game was later published by Gametime Games in a revised form as Grand Imperialism.