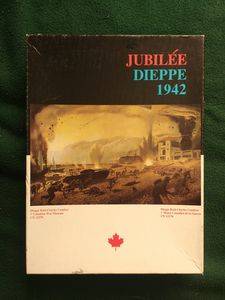 The game was released in 1992, the 50th anniversary of the allied raid on Dieppe. Historically, the raid was a disaster, but also a useful experience when it was time to plan the landing in Normandy in 1944. The game is fairly standard hex-and-counter with 130 combat unit counters and a mounted mapboard, and the system includes Zones of Control that stops movement (except for tanks) and an odds-based Combat Results Table.