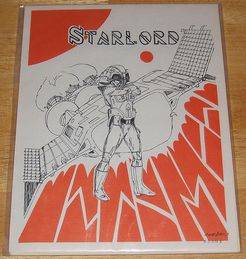 STARLORD was an independently published science fiction empire building war game. The game came in a large manila envelope. It came with 4 large blue-print card stock star maps, a small rule book, and four sets of tables and record sheets in plastic covers to allow writing with grease pencils. Each set had a star system record sheet, a distance chart, a ships log, and a Ship Statistics Table. Players had to provide a die and grease pencils. The die was only used to determine the number of planets at each star explored. There were no other random elements in the game. Each turn the players would write movement orders for their ships. Then if players encountered each other at a star combat could be resolved. Finally minerals would be collected at each controlled planet and loaded on transports for shipping to industrial planets for construction of ships. Each player kept all their activities secret on their record sheets, and the dice-less system of resolving combat allowed the players to know how many ships the opponent had in a combat, but not what type. The game worked best when there was a referee processing the players' input, and thus was very amenable to play by mail. However it could also be played without a referee. The game also included rules for alternate species that had special abilities and significantly different motivations, represented by different victory conditions.