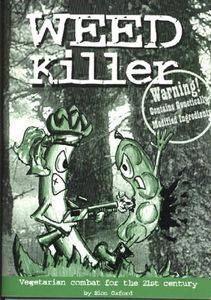 A game of Skirmish combat between Genetically Modified Vegetables Units are bought using points, possible troops include elite Asparagus and exploding Tomatoes. Each vegetable has its own advantages and disadvantages. A regular arsenal of vegetable portable weapons is available for equipping your troops. Rules for vegetable combat are provided featuring a number of intriguing ideas. Play is split into turns of five phases: movement, initiative, firing, shouting and melee. For initiative each player writes down the negative modifier they will apply to a unit's shot. The unit with the highest goes first and the unit with the lowest goes last. Some record keeping is required as each unit has hit points distributed between different hit locations. Running out of points in a location has specific effects on your veggies performance. The game includes thirty-six cut out stand up play pieces. Its time to "toast" those Vegetables you've always hated