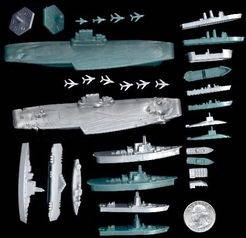 One of many games featured on ads in comic books from the late 50's into the early 80's. The "Convoy Terror" War Game by Five Star Toys (of Rego Park NY, later of Commack, NY) seems to have been an early version of Helen of Toy's "Fighting Ships." In fact, Five Star Toys may have been an early incarnation of Helen of Toy, Co. Like Fighting Ships, Convoy Terror featured 132 pieces - "Two Complete Modern Navies in Gray and Green." It also included a paper Playmat "Battle Area", "2 Gyroscopic Indicators", and a "Comparison Chart" showing real US and Russian Naval ships.