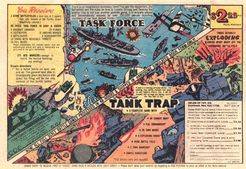 One of 9 games released by the Helen of Toy Game Company that graced many a comic book from the late 50's into the early 80's. Tank Trap was a classic Helen of Toy War Game that featured 3D G.I. Toy Soldiers by GIANT, a large "Battlefield" Playmat, and among other accessories, the infamous "Exploding Tanks." The game had 64 COMBAT MEN and 6 TANKS (3 olive green, 3 gray) set up on the 12 1/2" x 25 1/2" BATTLEFIELD. Tanks consisted of two hard plastic halves which were held together by rubber band tension and were triggered by the slightest touch. Note that later Helen of Toy Ads offered a "Free Chess Game" premium (actually just a printed piece of paper - you cut the pieces out yourself), promised 48 hours processing time, and claimed to be shipped in "Handsome Simulated Book Form" (actually just a flat, plain white, cardboard box.